Plumbing News April 2012 Summer is on its way? Water drought on its way. How to save water this Summer

In this month's Plumbing News April article we include: A quick brief in to Plumbing life in March - Martin Smith moves forward in expanding the Emergency Plumbing Business - Water Drought is on it way in the UK, Gas Engineer gets 22 week curfew, James Coburn gets Gas Engineer and Plumber of the month and how to save water this summer.

Plumbing News for April 2012 - Work as a whole starts to get quieter, we look in to the future of what it's going to be like for all Summer as the hose pipe gets a ban warning from the Midlands down to the South East of Britain. In over 20% of Britain there will be an hose pipe ban starting from April 5th unless we have plenty of rain, which is most likely not going to happen. We have more on the water drought at How to save water this summer. 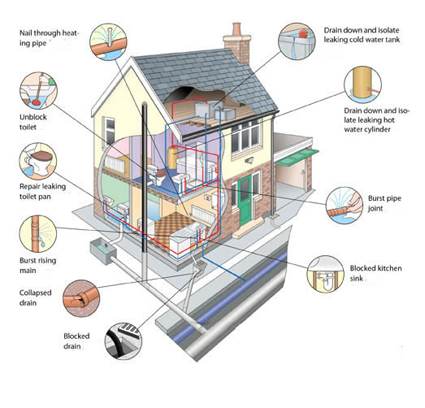 March has been slow but not too slow as Boiler's are still breaking down where there has still been some cold spells. In our Plumbing News March 2012 there has been a guy that had got 8 month jail sentence.

In the picture to the right, you will see some of the common Emergency Plumber issue's going on starting from the common nail through the pipe, to a blocked drain.

The biggest question this month has been all about "Is it wise to get an outside stop valve for my garden this summer, or should i wait until the hose pipe ban is off?"

Our advice is to get an outside stop valve but alway keep an eye on the ban as this may only be temporary and is not a permenant ban, whereas an out side stop valve will be there for years to come.

Expansion of our Business This month we have been building our business in the Nottingham area, hoping to draw more work for our new Engineers that have signed up with the site. This month we have taken over 20 Plumbing and Gas Engineers in the UK. Our future plans are building a new web site but in HTML 5 which will be targeting the Emergency Plumbing jobs.

The reason the Gas Engineer got 22 weeks is because he undertook some work in a restaurant in Chelteham. Timothy Smith an Unregistered Gas Engineer in Tewksbury inspected and tested Gas appliances. Timothy was found to be using the same registration number and similar name used from another Gas Engineer on his False ID. This only came about after the test was done, and there was calls made to the Gas Safe Register and then it was found that Mr Timothy Smith had forged the Gas Safe Certificates.