In this month's Plumbing News March article we include: A quick brief in to Plumbing life in February - Martin Smith moves forward in expanding the Emergency Plumbing Business - lady has bubble in ceiling, Rogue Gas Engineer gets eight months, Mark Tidd gets Gas Engineer of the month.

Plumbing News for March 2012 - What a February! Work picked up in style expecially in southern areas of the UK as we get east winds going west, which are coming from Europe. Our staff was stretched taking continuous calls non stop all day which broke the record of 116 visitors and now stands at 250 plus hits to our site set on 12th February 2012. Most of the calls we took was due to burst pipes which were coming from the London area and surroundings. All our Plumbers in London - we thank you very much for the hours they put in. Mark Tidd got the Plumber of the month March 2012 award due to the distance he covered, also coming down from Spondon Derbyshire all the way to Cambridgeshire where we was struggling to an an Engineer. Mark Tidd from Mark Tidd Plumbing & Heating, who lives in Spondon, Derby, answered every call in February regardless whether it was day or night. We recieved no complaints about his work performance or time keeping from any customers Mark attended to. 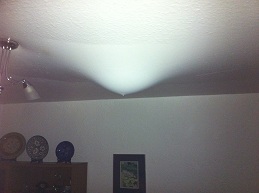 Last month in February there was a case were there was gas going in to the water near the Didsbury area - In this particular area the information we got off the customer was that the council had got their Gas Engineer to go round all the house. In this house, they unscrewed the screw end on the Central Heating Pump which was not tightened up afterwards. Water started to leak from this pump which was causing the ceiling to bubble. Luckily there was enough time to get a bin underneath whilst waiting for the Plumbing Engineer Martin Smith to arrive at the property. Martin Smith had put a small hole in the bottom of the ceiling allowing the water to drain out and had fixed the leak.

Expansion of our Business Our Emergency Plumbing Service has been taking a move forward lately thanks to the work on and off the site as we are now number 1 for "24 hour Plumber" and second in line on the first page for "Emergency Plumber" and touch and go for first page on the key word "Plumber." There are also other aspects of words which we are trying to compete for such has, Plumbers and Emergency Plumbers which we are appear to be getting stronger for. The forcast we are predicting for in March is more general Plumbing jobs and not many Emergencies due to the pattern as the weather starts to get warmer. This will enable us to have more time in the work we put in tothe site to build on its ever expanding reputation.

Rogue Gas Engineer gets 8 Months A North Wales man that claimed to be a Gas Engineer has been sentenced to eight month in Jail for dangerously installing a Boiler in Rhyl of Denbyshire.

Lee Hampshire trading as LH Heating and Plumbing was charged for claiming to be registered with the Industry Registration Scheme.

Mr Hampshire, of Prestatyn pleaded Guilty to breaching sections 3(2) and section 33(1) of the Health and Safety at work and for breaches of the Gas Safety Regulation 1998.

Chester Crown Court heard that on August the 11th 2009, Mr Hampshire made more than 3 errors, where one fault was class as immediately dangerous which then led to the Gas Meter being turned off.

Following installation, the gauge on the Boiler had a fault which Mr Hampshire had told the customer to contact the manufacturers directly. An Engineer was sent out to the property and noticed the flue had not been fitted with the appropriate screws. He also noticed a cap in the flue which should always be airtight.

Lee Hampshire provided the customer proof that he was Gas Safe, however unknown to the customer, his registeration had expired. Mr Hampshire had previously been given a prohibition notice the previous year, but had continued to carry on the work, showing he had no respect for the law. This contributed to the Judge giving Lee Hampshire a 8 month jail sentence. These actions have put the lives of others at risk which we hope this can be avoided in the future.