In this month's Plumbing News August article we include: Barnsley Plumber Jailed for 4 Months, Gas Explosion in Oldham, Gas Engineer falls of cliff and dies, Sutton Plumber cleared from cause of death to 26 year old. 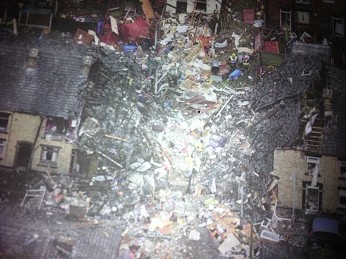 Gas Explosion in Oldham - A 2 year old dies in a gas explosion.

Jamie Heaton was watching TV when the House next door exploded as shown in the picture to the right. At first it was thought to be due to the Gas Engineer who has been on bail until further Investigation. The parents are found to be devasted and the funeral is to be held on the 19th July 2012. We wish the Family all the best. We have more about Gas Explosions.

Gas Engineer falls of cliff and dies - Gas Engineer who goes on Holiday for his Honeymoon falls from a cliff. Brian Orton, 45 from Coundon near Bishopp Aucklands of County Durham was walking back to his Hotel on July 1st, it was found to be dark.

His wife 40 was walking ahead but did not know that he had fallen.

When his wife went to look look for him she couldnt find him, so she informed the Hotel staff who had found him 90 minutes later.

Sutton Plumber cleared from cause of death to 26 year old - Louise Littlewood died due to a lack of Oxygen in her brain which lead to brain damage and was found dead in a bath. Luckily Simon Lilby 32 survived but was also found collapsed on the floor.

A Barnsley plumber was given a suspended sentence yesterday for undertaking Gas Safe work.

Mark Dixon who was Self-employed fitted a boiler in Barnsleyt, the Boiler once fitted was classed as an ‘immediate danger' when independent gas experts were called to investigate.

Mark Dixon was sentenced to four months in prison, suspended for two years, Mr Dixon was also given 180 hours' community service and was ordered to pay £1,200 compensation to the householders after pleading guilty to four charges under the Gas Safety (Installation & Use) Regulations.

"Mr Dixon pretended to be Gas Safe registered and was happy to take the homeowner's money, disregarding the serious harm and injury he could have caused,” said HSE Inspector Carol Downes.

The householder reported the issue to Gas Safe Register in January 2011 after the boiler failed to work properly despite several attempts to fix it by Mr Dixon.

The Gas Safe Regional Investigations officer found the boiler's chimney had not been properly connected to the flue and Dixon had pushed plastic insulation material down a separation gap to try to form a seal.

This defect was deemed immediately dangerous as the material would melt when temperatures rose causing fumes to enter the roof space.

This month we feel that nobody deserves Plumber of the Month due to our holiday period but we will be keeping a close eye for next Month.

Back to Plumbing News.