About Lead Pipe, Lead pipe as been a touchy subject when asking most Plumbers for information. Lead pipe has been around for hundreds of year. The Roman Plumbing had it, your Great Great Grandparents had it and theres a chance that we all have lived with it.

How do I know if I have lead pipe work in my house? 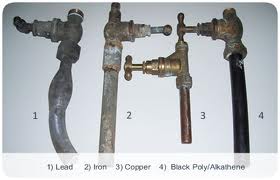 Know whever you have lead pipe work in the house can be tricky for some but for the general Plumber this should be common knowledge.

As shown in the lead pipe picture to the right. (1) This unusual pipe is made out of lead and will look like a shiny silver when it is easily scraped. (2) This is made out of iron which can mostly be found in underground terraced houses that were build over 100 years ago. (3) This is standard copper pipe that we generally use today, if not in plastic. (4) This is what is known as black underground alcaphine which had come about after lead underground pipe. The black alcaphine has since been upgraded to blue alcaphine.

Know the time of pipe you have in your house can save time and help for better prepiration in the future to save costs.

What is the thickness of lead pipe? 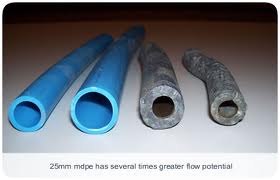 A question that is sometime brought up is. What is the thickness of lead pipe?

Having thick lead pipe give strengh and is also great for using when fitting a lead lock on it.

What is the flow rate of the same size pipe work? The difference is with the flow is in the older days there was not as much water used at once so the internal size was required as much. As time went on and the black alcaphine replace the lead pipe, the flow rate was twice the amount.

Is have lead wate pipe against regulations? 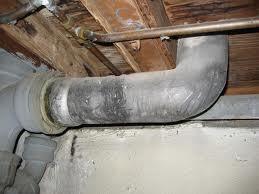 The answer to this is, No.

Lead waste pipe can be found in houses of 70 years old or more and started to be replaced by plastic waste at a similar time as copper was replacing lead.

As they realised by using other materials was benaficial and easier to maintain then lead pipe waste started to be discontinues and along came the plastic waste.

Another reason to replace the lead pipe is, lead waste pipes are more prone to leaks and blockages.

What is the law on lead pipe

What is the law on the water mains in the house when it comes to lead pipe? 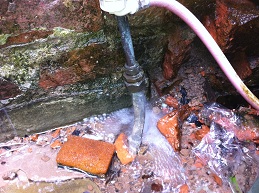 This type of job is what alot of Emergency Plumbers dont like attending due to the unknown regulations on lead pipe and the laws. When attending a water leak on the lead pipe it is normal practice to cut the lead and fit a lead lock and 15mm coper pipe. On this particular job to the left the lead came away a meter below the ground and I was able to turn the mains stop valve from the pavement. Once I had done this then there was no need to fix or turn back on as this run of underground pipe was not required as some old fashion out side toilets had a seperate stop tap mains.

We have more about can I fix a lead pipe burst without replacing all the lead pipe at the Lead Pipe Regulations.