Plumbing News January 2012 and a Happy New Year, are we going to get cold weather this year?

In this month's Plumbing News article we Include: The new year, A quick brief from Martin Smith on the future of the weather, and how a 2 year old girl dies from severe scalding.

Plumbing News for January 2012 December has been the warmest December on record despite the snow we had a week before Christmas, but now lets look in to the future and see what January has in store for us.

Our weather has been up and down this month, but the latest storms and winds have a lot to do with this. However there has been no signs of the artic winds. We have been seeing some unusual weather patterns this year with plenty of warm winds coming in from the South West which has resulted in United Kingdom not having any arctic winds. The biggest question on our minds is, " Are we going to get a cold January, or are we going to be breaking any more records of being the warmest month?". As the average temperatures are unusually higher than your average December/January, this is likely to continue until the winds change direction. As a Plumber, I have alot of interest in the weather patterns and watch all the science programs so I am upto date with the forecoming weather. As a Plumbing company, we get very well propared to tackle the worst of the weather as we are a national company on standby to take all your calls when in need of an Emergency Plumber. 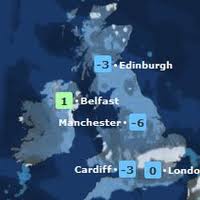 A young girl in the West Midlands has died from being scaldered from having a shower. This terrible incident is a reminder of how careful we should be when in the shower and what actions you can take to prevent a scalding incident happening in your home. Two year old Kristiana Logina from Smethwick, West Midlands suffered 10% burns when having a shower in December 2011. The water was thought to have reach 58°. The incident did not take place straight away but got worse when a relative did not seek imediate medical advice straight after the incident. This type of incident is classed as a low risk but on this case this was put down has complete negligence, but we also find this another case to put forward the reason why we should have Thermostatic Shower expecially when it comes to the elderly in there own homes. Common sense would have stopped this incident from happening, and if there was a thermostatic shower then this would of most definately not happened. This is the reason which we should therefore have a thermostatic showers installed. In the past 5 years there has been 51 deaths from people getting scoldered at bath times, which 3 of them have been recorded in 2011. At the moment this has not become a law but Plumbers, Buliders, Tilers, Electricians should all be aware of this and help by giving crutial advice to customers to prevent this from happening.